On July 1, 1968, Lt. Warren (Buddy) Zimmerman retired from the Alexandria Police Department and started having lunch with other retired police officers. For the next two months “Buddy” and his friends made arrangements to get together. At this time it was mainly a social gathering, but “Buddy” had started formulating some plans for the future of this organization. Due to his untimely death on October 18, 1968, his plans for the organization were not implemented. Little did he know how this organization would grow to the magnitude it now enjoys.

The retirees continued to meet and moved forward with the plan envisioned by Lt. Zimmerman. From the onset only about three or four were getting together, then as time went on more retirees started to attend. In the later part of 1968 and into 1969 attendance increased with more police and an invitation was extended to retired firefighters to become members. In December of 1969, leadership was established. A president and secretary were elected, and a semi-business-like system was developed. Lt. Henry F. Grimm Sr. was the first elected President and Lt. Robert A. Brenner, Secretary.

The organization continued for many years and as the membership grew, there seemed to be a need for other officers to be added and to maintain an executive type group for conducting affairs and assisting in operations of this organization. At this time members of the Sheriff’s Department were also extended an invitation to join with us upon their retirement.

Since 1968 we have continued to operate as a social/business type organization. We are guided by a set of by-laws that were established and became incorporated August 3rd, 1993. We send out a quarterly newsletter with items of interest from the group and other items received. We welcome and look forward to your attendance and participation in our monthly luncheon meetings.

We feel that in the past few years we have become more progressive and membership has increased to the present (1998) level of 224 members. We hope the recent campain for membership will continue to attract retires to become members. 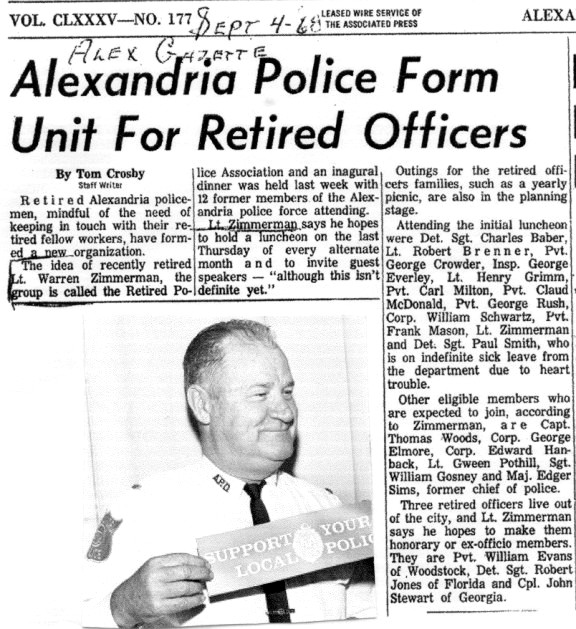